Marshall Zebra appeared in "The Warmth of an Invisible Light" as General Valentine's second in command. He built the decoy Dylan Hunt androids that were actually bombs. In the alternate reality they were fighting Commander Harper and Police Chief Rhade. He was disintegrated by Harper with the EM-Bender. 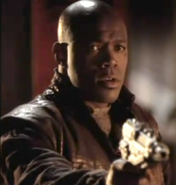 Add a photo to this gallery
Retrieved from "https://andromeda.fandom.com/wiki/Zebra?oldid=38880"
Community content is available under CC-BY-SA unless otherwise noted.