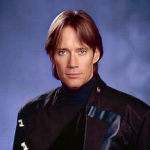 Add a photo to this gallery
“The long night has come. The Systems Commonwealth the greatest civilization in history has fallen. Now, one ship, one crew have vowed to drive back the night and rekindle the light of civilization. On the starship Andromeda hope lives again”— Intro to Season One

“He is the last guardian of a fallen civilization, a hero from another time. Faced with a universe in chaos, Dylan Hunt recruits an unlikely crew and sets out to reunite the galaxies. On the starship Andromeda hope lives again ”— Intro to Season Two

“The Universe is a dangerous place. But in our future my crew and I fight to make it safe. I am Dylan Hunt, Captain of the Andromeda Ascendant, and these are our adventures.”— Intro to Seasons Three, Four and Five

"Welcome to my page, I am Captain Dylan Hunt, Captain of the Andromeda Ascendant. My Crew and I fight to reunite the known galaxies and to make it safe. Welcome to our adventures"

if you want to see all five awesome seasons from beginning to end, Click here [1]

Retrieved from "https://andromeda.fandom.com/wiki/User:KevinSorbo?oldid=39523"
Community content is available under CC-BY-SA unless otherwise noted.