"We say atoms are bound by
Weak Attractors.
Why not admit the Truth:
The Universe is held together by Love."
Michio Von Kerr,
Wayist physicist,
CY 9942

"The Banks of the Lethe" is episode 8 of Season 1.

Andromeda is back at Hephaistos IV, where some Perseids have her computer hooked into the Black Hole, studying the wave function of the universe. Dylan has agreed to let them conduct their experiments in order to convince Xinti to join the New Systems Commonwealth. Andromeda finds being hooked up to the black hole uncomfortable. Dylan just hates being near the black hole. He remembers his fiance, Sara Riley.

Flashback to 300 years earlier. Sara, and Ismael Khalid (a Nietzschean friend of theirs who stayed loyal to the Systems Commonwealth), are on the Starry Wisdom, a research vessel, at the Hephaistos IV black hole, trying to rescue the Andromeda. They locate it, but they are alert for Nietzschean patrols.

Sara remembers meeting Dylan. She was working on a research station which was attacked by Magog. She insisted on staying to work on an experiment during the attack, and Dylan and Ismael Khalid rescued her.

Seamus Harper and the Perseids have built a Quantum Entanglement Teleporter (QET), using the Andromeda's quantum computer and the wave function information they are able to extract from the black hole. Harper is testing it with one of Trance's plants, but the plant explodes.

Rev Bem suggests Dylan should send a message for Sara into the black hole, as it may be therapeutic, and help him deal with the loss. Dylan does this, and to his surprise, he receives a response from Sara, 300 years in the past. They establish communications, and Dylan tells Sara what has happened to him. She insists that she will keep trying to rescue him, regardless.

Harper has an idea. He demonstrates to Dylan that, with his teleporter, he can send a Cali-melon a few seconds into the past. Unfortunately, the Cali-melon explodes. He says that if they sent a message, why not send Dylan? It all comes down to information.

Dylan projects a hologram of himself to the Starry Wisdom. He tells Sara that her plan will not work, because he knows that it did not. She says that she may be able to create a divergent timeline or something, but she refuses to accept defeat.

Dylan speaks with Khalid. Khalid says that Sara is worried. Dylan tells him to look after her and take her someplace safe and that the Than-Thre-Kull home world comes through the war more or less in one piece. Khalid says "I'll take care of it."

Sara deploys anti-gravity pods around the Andromeda, but a Nietzschean fighter attacks the Starry Wisdom, disrupting the rescue. Khalid is injured, and the Starry Wisdom is damaged (including disabling their fire control). Dylan uses the AG pods to increase the mass of the fighter, causing it to be sucked into the black hole, but they lose the pods as well, and they are out of position for another attempt. A Nietzschean destroyer is spotted at the slipstream portal, which is about 11 hours away, and it will take 12 hours to maneuver into position for another attempt to rescue the Andromeda. Sara, however, is still not willing to quit.

Dylan plans to use Harper's teleporter to go, physically, to the Starry Wisdom, with the hopes of returning with Sara. Tyr approves Dylan is taking chances, but his objective is genetic survival. Tyr asks Dylan what happens if he dies in the attempt. Dylan says that Beka takes command of the Andromeda, but he wants Tyr to stay and help.

Harper has succeeded in teleporting a plant, and he has created a signal booster for Dylan to give to Sara. His realistic assessment of the situation is that he has a 50/50 chance.

Rommie tries to talk Dylan out of taking the risk. She points out that she could prevent him from doing it by breaking the connection, but she won't.

Beka also tries to talk Dylan out of it. She asserts that he feels guilty for surviving, and this is not a reason to die. Dylan is adamant that he is coming back, and steps into the teleporter. He appears on the Starry Wisdom just as the Nietzscheans begin their attack.

The Andromeda in the "present" is also attacked by Nietzscheans. Tyr believes that this is not a coincidence that the Nietzscheans from the past left a message. Andromeda's computers are hampered by the connection to the black hole, but if this connection is cut, Dylan will be stranded. Dylan tells Tyr that he "knows what to do".

Beka and Tyr have a confrontation about what to do about Dylan they actually draw guns on each other. Beka tells Tyr not to leave him. Tyr acknowledges that Dylan is worth more to him alive.

On the Andromeda, Tyr lures the Nietzscheans in and attacks them with fighters (on remote control), destroying the ship.

Harper tries to transport Dylan and Sara back to the Andromeda, but he cannot get them both there is too much data for Andromeda's computer system. He can get Dylan because of data he stored earlier, but not Sara, and more Nietzscheans are on the way. Sara tries to convince Dylan to stay, but Dylan says that the Commonwealth is more important than either of them. Sara understands, and Dylan returns to the Andromeda.

The Xinti council is pleased with Dylan's cooperation in their experiments, and sign the charter as the first world to agree to a restored Commonwealth. Harper wants to celebrate this, and Dylan says "The crew's worked hard for this moment. They deserve a little celebration, don't you think?"

In further analysis, Rommie discovers that Sara's work made it possible for the Maru to pull the Andromeda free 300 years later. She saved Dylan after all.

Sara: I can't leave, not until my experiment finishes running.
Dylan: You mean this? (points, shoots, destroying computer) Now it's finished.
Sara: Admiral Stark warned me about you.
Dylan: Really? And what did she say?
Sara: That if I ever met you, I'd end up either falling in love with you, or killing you.
Dylan: Ah. I have that effect. Stay close.

Harper: It's a teleporter. It scans you, destroys you, transmits you through the projector, and then rebuilds you from the particles up. Hilarity ensues.
Beka: I think Mr. Heisenberg would object.

Dylan: (to Rommie) When I touch you, do you feel me, or do you measure the pressure of my fingers against your skin? When I speak, do you hear me, or do you interpret an acoustic wave? I can't be objective about this, I'm not a machine.

Hohne: I must say, the prospect of tearing you apart particle by particle and re-assembling you on a ship 300 years in the past is quite exhilarating. We admire your devotion to science.
Rommie: And the information exchange with the singularity is taking up a lot of my attention.
Dylan: Which means Andromeda's instantaneous corrections aren't as instantaneous as usual.
Hohne: We're all painfully aware of your AI's limitations, Captain. That's why we only plan to maintain the quantum interface for another forty eight hours or so. Well within your ship's safety limitations.
Rommie: Well, I can't argue with his math. 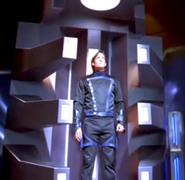 Dylan in the Quantum Teleporter 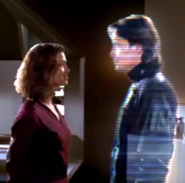 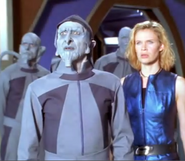 Hohne, Beka, Rakeeb and unnamed Perseid seeing Dylan return in the QET
Add a photo to this gallery

The Banks of the Lethe was released on DVD in a variety of formats. For more information see:

Retrieved from "https://andromeda.fandom.com/wiki/The_Banks_of_the_Lethe?oldid=36883"
Community content is available under CC-BY-SA unless otherwise noted.