During the Fall of the Commonwealth, the Than, who were part of the Systems Commonwealth were scattered across the galaxy. Although their Hegemony had fallen from political prominence and was viewed as a figurehead government, the fall caused the Than-Thre-Kull to reform it into a powerful nation once again. The Than began to amass large amounts of military equipment which enabled them to defend against threats like the Magog and Nietzschean prides. They also have been known to act as peace keepers in large tracts of neutral space. Though the Hegemony opted not to join the New Systems Commonwealth the Than nonetheless are still one of the Commonwealth's most powerful allies. 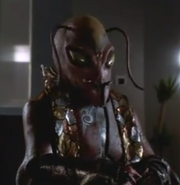 Than Hegemony general Clarion of Loss
Add a photo to this gallery
Retrieved from "https://andromeda.fandom.com/wiki/Than_Hegemony?oldid=39564"
Community content is available under CC-BY-SA unless otherwise noted.