Spirit of the Abyss

The Spirit of the Abyss, or simply known as the Abyss, is an enigmatic entity that is the leader and god of the Magog. It is also the most frequent nemesis of the New Systems Commonwealth.

Attacks on the Known Worlds[]

The Abyss led its Magog legions on attacks at the Systems Commonwealth and the Nietzschean Alliance. During an assault on Brandenburg Tor, a recording of the Abyss was captured.

When the Magog signed the Treaty of Antares, the Abyss manipulated the Nietzscheans into overthrowing the Commonwealth.

303 years later, the Abyss dispatched a bounty hunter named Jeger to kill a Perseid who was holding the database of the All Systems University, including the footage from Brandenburg Tor. However, the Perseid passed on the data to Seamus Harper. Jeger failed in his task to prevent the footage from being seen or to extract the data; and as a result, the Abyss killed him.

When the Andromeda Ascendant encounters the World Ship for the second time, its Magog crewman, Rev Bem, came into contact with the Abyss.

When the Andromeda launched a Nova bomb in an attempt to take out the Worldship, the Abyss absorbed the energy caused by the Worldship's sun going supernova. It then briefly appeared before the crew as they attempted to escape, throwing a few fireballs at them before disappearing.

Subsequently, the Abyss sent another agent, Satrina Leander, to seduce Harper into handing over the All Systems University database in exchange for removing the Magog eggs from his body. Harper was tempted to join the Abyss but instead turn the tables on it, disabling Satrina and her assassins, and preventing them from sabotaging the Mutual Defense Pact.

About two years after the New Systems Commonwealth had been formed, the Abyss began collaboration with several of its corrupt Collectors, people descended from the Special Collections Division, promising their survival in exchange for bringing the Commonwealth down from the inside.

When Tyr Anasazi was trapped in an alternate universe in a misguided attempt to use the Route of Ages to harm the Abyss, he made a bargain with the Abyss, offering it Beka Valentine, who the Abyss sealed Radical Isotopes within, in exchange for being released. The crew of the Andromeda later learned of the existence of radical isotopes when the Abyss attempted to sabotage a convention on Galena where the universe's finest minds were attempting to figure out a way to destroy the World Ship.

The Abyss made its most cunning plan yet after the World Ship was crippled at Arkology; it placed a look-alike of Trance Gemini among the crew and imprisoned the real one in the Methus-2 sun, possessed the entire Lambent Kith Nebula to fool them into expanding the All Forces Nullification Point (which would consume the Tri-Galaxies), and made pacts with the Jaguar Pride and Drago-Kazov Pride to attack the Commonwealth. Dylan saw through this plan and it destroyed Maura, its Avatar controlling the Nebula. Later, in a confrontation with the Trance look-alike Virgil Vox, Dylan killed that Agent too. He discovered that the ancient Vedran sun was designed as a weapon that could destroy the Abyss. It was burned to death at the center of the Route of Ages, ultimately ending its existence.

In the Route of Ages, the Abyss can be anywhere or any time. Mainly, the Abyss has defensive capabilities such as of throwing fireballs. It can possess corporeal beings through use of Radical Isotopes.

Bridge of the Andromeda 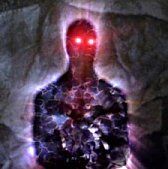