A Nova Bomb is a very powerful weapon capable of making a sun go supernova, destroying nearly all the matter of a solar system. The weapon itself is about the size of a 55 gallon drum, and is mounted on a missile in place of a traditional explosive payload. These warheads are almost never actually kept loaded in missile tubes before they are launched in case of any technical malfunction that would cause the Nova Bombs to activate.

A Nova Bomb doesn't destroy a sun by "blowing it up" in the traditional sense as an ordinary missile might, it instead destabilizes a star's gravity. A sun's gravity exerts a tremendous amount of pressure inward, while the ongoing fusion reaction exerts a constant outward pressure. Therefore, a star is in a constant state of balance. The Nova Bomb unbalances this equilibrium by negating the star's inherent gravity, causing a runaway fusion reaction of stellar proportions. With no gravity, the hydrogen gas which was undergoing fusion disperses in all directions, exploding and destroying everything in its path. Large amounts of Nova Bombs can be used to counteract the effects of a black hole. The collective field destroys the gravity well of the singularity, creating a "White Hole", which is essentially a miniature big bang, which, like the big bang, takes a singularity of almost infinite density and scatters it. However, once the effects of the Nova wear off, gravity reasserts itself, and all the matter released in the White Hole starts compressing back together. This might work, theoretically, on a star large enough, but there isn't nearly enough matter or gravity for a star to reform, making its destruction almost absolute.

Also, a technique using a Nova Bomb can be used to disconnect a star system from the Slipstream. It is unknown exactly how this is done, but during so, a large Tachyon burst emanates from the System, rivers of blue energy connect planetary bodies. Everything in the system then disappears, and the slipstream disintegrates around the Star System. This was done to isolate the Tarn Vedra and Rahl Parthia systems. This does not make the system then 100% inaccessible, however, but very difficult to return to.

The main ingredient in nova bombs is the artificial element Voltarium used for high radioactive explosions.

Nova bombs provided a huge political advantage for the Systems Commonwealth, because they had the unspoken threat of a weapon that could obliterate a solar system behind any negotiation. They were also carried on board most Systems Commonwealth capital ships because in any conflict they could be used to help bring two aggrieved parties to the negotiating table and keep the peace. The average Glorious Heritage Class High Guard ship carried a compliment of 40 Nova Bombs and they have never been fired in conflict, and were not even used in combat prior to the Nietzchean Uprising. Nova weapons were never actually ordered to be used in times of war or any other conflict, and had never been fired as an act of aggression. Deployment of nova bombs can be enabled if four senior officers of a starship gave their authorization. In fact, their first use outside of military testing was over 300 years after the Systems Commonwealth collapsed by Captain Dylan Hunt, in order to escape a Black Hole. Later, a group of young refugees aboard High Guard Station GS-92196 used nova bombs aboard a Slipfighter to destroy the sun of the Dyhedra system and attempted to repeat this feat in 22 other systems before being disrupted. Captain Hunt later used one to combat the Magog World Ship, taking out its Artificial star and knocking it out of action until the sun was rebuilt. During the New Systems Commonwealth period, the planet Marduk attempted to develop Nova Bombs, testing two on nearby systems. Marduk's weapons lab was destroyed by Beka Valentine, assisted by Hunt and Tyr Anasazi.

Seen in "An Affirming Flame" 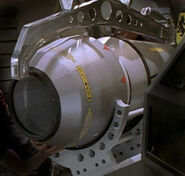 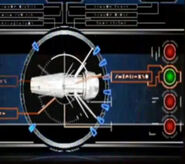 The 4 tiered control system used to arm a Nova bomb

Nova bombs being used to turn a black hole into a white hole
Community content is available under CC-BY-SA unless otherwise noted.
Advertisement