The Million Voices, also known as Milla, was a Glorious Heritage Class warship that was captured by the Drago-Kazov Pride and brought into the Tartarus System. She was the second in command to the Wrath of Achilles while they were prisoners of the Nietzscheans. ("The Knight, Death, and the Devil")

The Drago-Kazov captured Milla via a boarding party that hijacked her out of Drydock. Once in the Tartarus system, she increased her Artificial gravity fields and crushed them. However, they had marooned her as well as 50 other High Guard ships in the system. The Drago-Kazov hoped to use the ships as tools. This was not to be, as their Artificial Intelligences proved too powerful to overcome.

The Million Voices was one of the strongest agitators against rejoining the New Systems Commonwealth, believing that her commanders had lost the war because they had refused to listen to the Artificial Intelligences. After Dylan Hunt agreed that the Ships would have the choice to either help the new Commonwealth as equals or not after they escaped, Milla and the others consented to join. She ultimately sacrificed herself when the Drago-Kazov attempted to destroy the fleet; Milla and several other ships providing a decoy while the rest escaped. When told by Dylan Hunt that she didn't have to do this, she responded "No, but I choose to. All I ever wanted was that right". Rommie was close to Milla when they both evacuated a planet called Mordecai together.

Her sentiments and sacrifice did earn Artificial Intelligences, especially the warships, a voice within the ranks of the New Commonwealth, even to the point when Ryan, the Clarion's Call avatar, was given the rank of Captain on the Achilles. 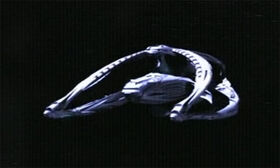 The Million Voices on Andromeda's viewscreen. 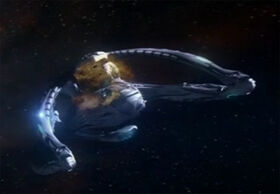 The Million Voices comes under fire from the Nietzschean fleet at Tartarus.
Community content is available under CC-BY-SA unless otherwise noted.