Celestial Avatars are the constructs created by stellar bodies in order to travel, communicate, change and manipulate important events in history. An Avatar's appearance usually reflects what its respective celestial body looks like, in either a superficial way or by how the Avatar acts. They are extremely powerful creatures, and often change events on a universal scale. While they are immortal and can recover from most injuries, even fatal ones, Avatars can be killed once their Celestial Bodies are destroyed as shown when Dylan Hunt killed Virgil Vox with his force lance. The fact that they cannot truly be killed symbolizes the fact that they are neither alive nor dead. They merely exist as housing for the life force of the celestial body they represent. The power and strength of the celestial body may determine what they can and how long an avatar takes to recover from something. They are ruled by the Lambent Kith Nebula.

Celestial Avatars are known as extremely powerful and long lived creatures due to their connection with their celestial bodies and nearly impossible to defeat except by another Avatar. They can recover from wounds, even fatal ones but they will come back to life by the energy of their counterpart re-energizing them until they are resurrected. Avatars also have the ability to fold space and transport themselves and others to other locations just by simply focusing on the location they wish to go. Celestial Avatars is that they can mimic the primary element of their celestial counterpart, such as Trance and Virgil Vox being able to use solar blasts from their hands and throw them against an opponent. These are powerful enough to make Dylan Hunt fly off of his feet and land several feet away from the avatar that fired the shot without any permanent damage, but this may have been because of Dylan's Paradine nature, it is unknown what it would do against normal beings.

The most unique abilities possessed by the Avatars are that they can show their true nature through their eyes and even taking on the form of their counterparts, such has Trance when she became the Core and going supernova to destroy the Andromeda and her crew in order to bring it back to their universe. They can also move through Time, Space and even Dimensions and other universes to guide others or simply to explore. Another is the ability to see multiple possible outcomes of the future.

The Avatars do not appear to have any major weaknesses as they are connected to their celestial counterparts but it has been shown that extended period within Slipstream could actually weaken an avatar to the point of death. This has been shown with the case of Trance Gemini's life force being drained by it, losing her connection with her sun; but this could be an either isolated incident or common for young Avatars. In addition, Avatars are only as powerful as their Celestial counterparts. If the Celestial Body is destroyed, the Avatar's ability to regenerate is also lost.

Avatars may also experience minor pains or feelings of uneasiness while in close proximity to Voltarium for reasons not entirely understood. It's possible that because voltarium is a key ingredient in the creation of Nova Bombs, which destroy matter completely, this is the cause of the Avatar's discomfort. Trance states that there is nothing left of a star after a Nova is used, it initiates complete and utter destruction of the Celestial Body. Trance simply refers to it as "the darkness" in lieu of any formal explanation. ("Slipfighter The Dogs of War")

Avatars usually assume a humanoid form, but are themed by whatever celestial body they represent. The humanoid appearance is most often merely a collection of humanoid features gathered most probably by viewing other species of the galaxy. It provides a better mode of communication by making the avatar relatable or approachable. There is normally a coloring of the construct body which hints at the original being it represents.

Maura is the Avatar of the abyss. 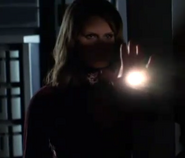 Hephaistos Avatar
Add a photo to this gallery
Retrieved from "https://andromeda.fandom.com/wiki/Celestial_Avatar?oldid=39298"
Community content is available under CC-BY-SA unless otherwise noted.