The most recent in a long line of those entrusted with the care of the archives on Daedalus V, Amira is understandably skeptical concerning the good intentions of the crew of the Andromeda Ascendant when she first encounters them in "Time Out of Mind". Amira is the Collectors' representative, however, she has no connection to the faction which allies itself with the Spirit of the Abyss, and indeed her archives are the target of an Agent of the Abyss, Lisset.

Amira: You're Captain Dylan Hunt.
Dylan: Guilty. We weren't sure of the reception we'd get if we announced ourselves.
Amira: I'm Collector Amira. I can't imagine how you found our special collection, or what brings you here.
Dylan: Just doing a little research.
Amira: In our Archive, there is nothing but stored recordings of historical events, popular culture, and literature collected over centuries by our field operatives. What makes the Archives unique is that you experience them instead of simply reading them.
Harper: Sounds like the Montrosian Archives. The knowledge of three universes. Hey, wait a minute. These are the Montrosian Archives, aren't they? That's why records say Daedalus Five was obliterated.
Amira: Yes, in order to protect the Library, we led people to believe it was destroyed. 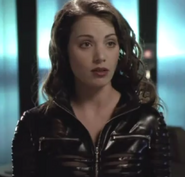 Amira showing Harper the Tri-Keys to the VR simulator.
Add a photo to this gallery
Retrieved from "https://andromeda.fandom.com/wiki/Amira?oldid=39139"
Community content is available under CC-BY-SA unless otherwise noted.